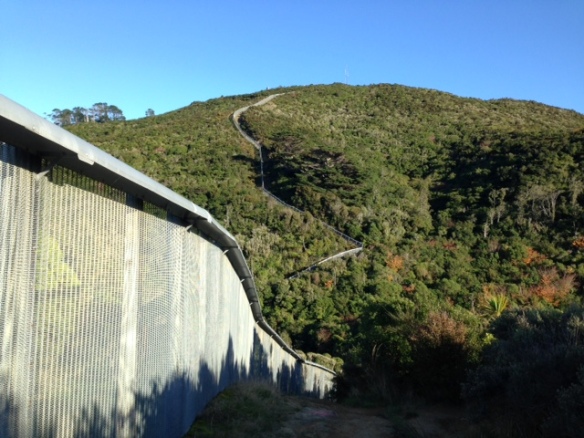 I’ve just returned from a week in Antarctica’s northern-most base-camp, Wellington. Actually, the weather was beautiful some of the time, so I won’t get too carried away, but it was certainly…..refreshing.

Here, in no particular order, are some things that Australians might find interesting about Wellington.

Zealandia is a 225 hectare bird sanctuary between the suburbs of Karori and Brooklyn. You can read more about it on their website, so I won’t reproduce that information here. What isn’t mentioned, however, is that the sanctuary abuts many houses – it literally runs right up to the edge of the suburbs. In a country where the damp is so comprehensive it has risen up and gone back down,’bushfire risk’ is a quaint, but utterly foreign concept, like effective insulation or government corruption (New Zealanders try hard, but come home hungry on this one).

Aside from the organised ‘activities’ at the Zealandia centre (which I never went to) the sanctuary is basically an enormous fence encircling remnant and regrowth native bush surrounding the water reservoir. There are walks through the sanctuary, but there’s also a track along the outside of the fence, separating houses, scrub and easements from the sanctuary itself. I assume this is to stop the possums from leaping over the fence – New Zealanders are very athletic. It means you can access the bush and the birdsong from many places – often just down a little track or driveway.

For me though, the most striking thing about the sanctuary is that there are now native birds, and their song, all over the suburbs. The cats of Karori have never been happier.

This is a dramatic change that has taken place in about twenty years (the last time I spent any real time in Wellington). There are also other little patches of bush around the sanctuary, connected by walking tracks – the Birdwood reserve for instance – that connects Karori with the Karori tunnel, and forms part of some people’s daily commute. Imagine if half of your 40 minute walk to work in the CBD was spent in a green tunnel of forest?  You’d have to listen to Alan Jones on your iphone.