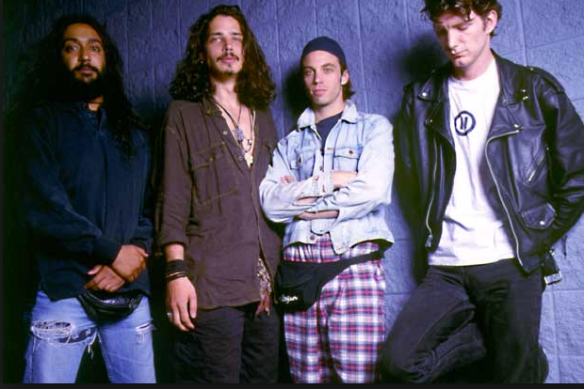 Chris Cornell’s suicide made me think about a few Gen-X things, foremost of which was – why on earth did anyone ever think really greasy hair and a pervert triangle was attractive? But of course we did.

His suicide was a surprise, according to those that knew him, although this is the media interpretation so we will never really know. Suicide is so hot right now, it’s the epitome of a pathologised social disease, which is, of course, why it happens so much. I believe in clinical depression, certainly, but it’s pretty clear that many people who commit suicide aren’t clinically depressed. Their lives are, by some measure or another, fucked.

I think the expectation that we can live on nothing more than cardboard and chicken salt, while sitting on our dates being actively told we’re losers is a recipe for what one might call depression. Chuck into that pot a generation or two of children for whom any kind of parental love has been mediated through the state, childcare, endless ‘interventions’ that only serve to tell children how shit they are….it’s not bloody wonder people grow up feeling a bit shit.

Soundgarden emerged as part of the grunge movement – a reaction to the hyper-capitalism of the early 90s in which we were all informed that one was completely without value unless they were headed down the path of preppy investment banker or lawyer. The music of Nirvana, Soundgarden and all the rest was pretty potent reaction to the teenaged anomie at the time – the sense that we were nothing and would become nothing – little more than a drain on the state.

I think there’s something else people miss too, most succinctly put by a friend who worked for the Women’s Refuge. People accept the treatment they think they deserve, and those who grow up unloved fail to see when they are. I guess this is obvious, but it seemed so apposite and astute that it’s stuck with me ever since. I’ve known so many, many people, men and women, who simply cannot see when they are loved, because they don’t believe that it’s something ‘for them’ – it is for other people. They can give love, but expect none of it in return. They are often suspicious of and callous with the love they are given. I’m not even sure they mourn its absence.

I once listened to a very famous and accomplished chap talking about his lifelong struggle with alcoholism. He drank himself to death shortly after. He described his parents’ abusive – it was truly shocking – and of course he grew up thinking that he was nothing more than a hindrance of no value whatsoever. It struck me as quite shocking that someone so successful could think of himself in this way, but his successes never really cut through to him – it seems to me he had no sense that they were his.

I’ve often heard people say they’re no good, or they have no value – well I like to remind people to look at the social context they find themselves in. You might be on a zero hours contract (I am – on four of them!) while simultaneously being made to feel like a loser for not being ‘work ready’ or indeed, in any way suitable to for the world that we currently inhabit. It doesn’t help that the government heavily invests in stigmatising those who aren’t perfectly suited to the modern world as they define it. But here’s the thing – who is? The people we hold up as successful are usually tidy little psychopaths, and if they’re not they’re living lives that are as unfathomable to them as the rest of us. There are precious few people in this world who are ‘living at the centre of their own life’.

Those who are are, in my experience, extremely bright – they’ve got both the ability to pursue an interesting life regardless of their schooling and the imagination to think about what that might look like. For the rest of us, let’s go with a normal distribution and say that’s roughly 97.5% of humans, then your life chances rely heavily upon your schooling. And schooling relies heavily upon the quality of teaching as well as all the other factors that contribute to learning, such as home life, nutrition, sleep etc.,.

So yeah, the short version is, you probably are without value. Most people are – we are nothing more than a pack of meatsacks, wobbling around, waiting to turn up on instagram when we fall sideways out of a boat. There is nothing inherently special or precious about you. But equally, there is nothing inherently precious or special about anyone else you know – we’re all pretty much mediocre. The best we can do is be nice to one another. It might sound like perverse advice for the suicidal, but really, this is the nub of it. If you want to find happiness, try being somewhat self-sufficient. So far it’s the only thing I have encountered that enables people a modicum of pleasure, dignity and community.

Perhaps I might offer one other piece of advice for the unloved children out there. Western culture has given us the cult of unconditional love – the idea that being a child necessarily means you will be showered with love, regardless of the circumstances in which you came into the world. I can only blame the Christians for this, because for the rest of history, children’s treatment reflected their (diminished) circumstances. In fact, just the other day I read of a couple in the US who had adopted a daughter from a single mother who had three children already but had just lost her job. Too many mouths. Was that mother incapable of loving that last child? I don’t think so. Children have been abandoned throughout history, it’s only recently with the modern surplus of taurine flavoured bio-formula and plastic nappies that we’ve been able to sustain the newest members of our families. Don’t get me wrong, I love my kid to bits, but I’ve had the luxury of being able to love her, unfettered by the daily struggle to survive.

The social and demographic implications of abortion have been debated (contentiously – I’m looking at you Freakonomics) but the reality stands – this newish idea of unconditional love for your children is strongly correlated with access to effective contraception.

Children are loved, yes, they are, but the handwringing about their poor treatment woefully underestimates the impact of poverty and strain. Young women often have babies thinking that they will ‘be someone’ when they’re a mother – and they are, but it’s not much of a step up from being nothing at all if you do it poorly. And it’s hard to do it well when you’re skint and constantly reminded you’re a blight on society. I guess what I’d say is that it takes superhuman parents to treat you as the centre of their lives when their lives are a complete, impoverished shambles.

Incidentally, I’m always intrigued by the discussions about Finnish schooling. It’s so creative! And innovative! And teachers are so respected! This discussion is directed at Australia’s ever shrinking middle class, those who have some sense of buy-in to the education system, who actually think about how schooling might be made more effective for their kids. These parents are in the minority. Most parents are disengaged, they know there is no point in even thinking about ‘better outcomes’ for their children – they get what they get and they don’t get upset. Almost everyone who comments on social media about the ‘Finnish example’ could just about afford to send their kids to school in Finland.

That’s more than 500 words of rambling for today.