It’s a good line isn’t it? Certainly got everyone’s attention. Here’s the stat;

Around half of all university students (51%) were sexually harassed on at least one occasion in 2016, and 6.9% of students were sexually assaulted on at least one occasion in 2015 or 2016. A significant proportion of the sexual harassment experienced by students in 2015 and 2016 occurred in university settings. For the purposes of the National Survey, incidents which occurred in ‘university settings’ included sexual assault and sexual harassment that occurred:

• on the university campus

• while travelling to or from university

• at an off-campus event organised by or endorsed by the university, and

Experiences of technology-based harassment were included where some or all of the perpetrators were students, teachers or other people associated with the university…..

When incidents of sexual harassment which occurred while travelling to or from university are excluded, the Commission found that 21% of students were sexually harassed in a university setting in 2016.

Still, 21% is quite a high rate but then it apparently includes being harassed over ‘technology’. Does this mean a vaguely smutty/insulting remark in response to something (equally offensive) that you’ve posted on Facebook is sexual harassment? If that’s the case then I think 21% is remarkably low.

No matter. 51% is a great statistic. Especially on Twitter. 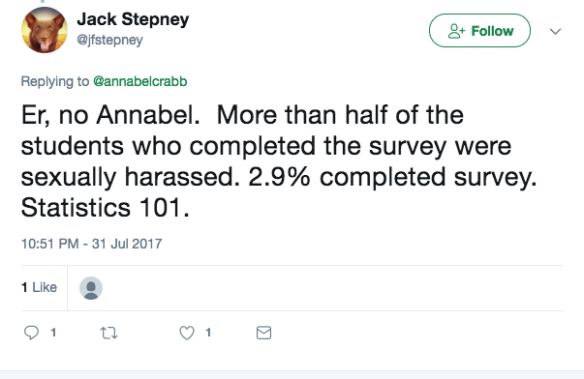 Here are some numbers for Mr Stepney and those like him.

– The survey polled around 30 000 students, yielding a standard error of around +/-0.4%. 30 000 students could therefore be considered a representative sample.

– Annabel Crabb is a well known and respected Australian journalist. She has 437K followers.

The main problem with this survey is that it’s biased towards those who would take the time to fill it in. In other words, it’s more likely to attract those with some experience of sexual harassment or assault.